Launching... TOGETHER, WE ARE THE VOICE! 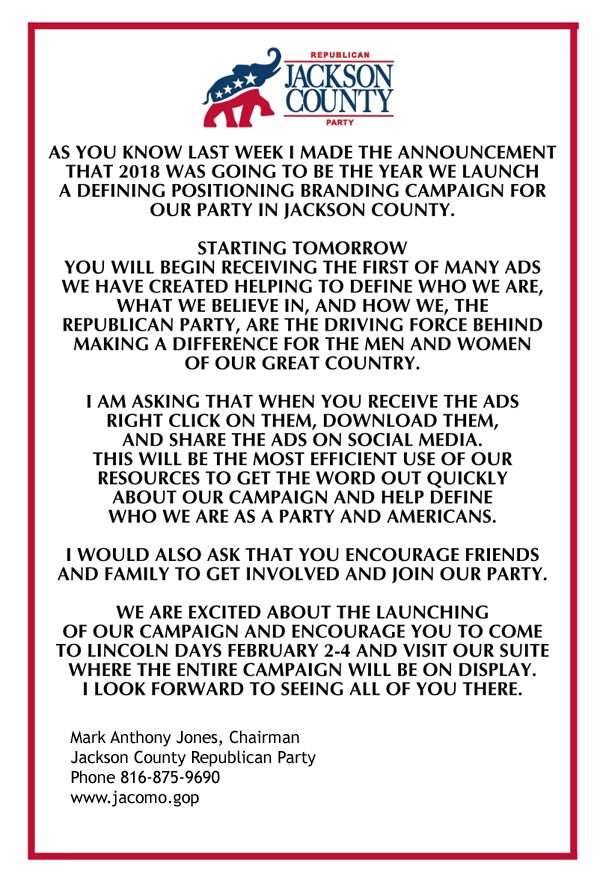 RSVP NOW! We look forward to seeing you there!

Introducing New Logo and Theme: TOGETHER, WE ARE THE VOICE!

2017 has proven to be an historical year as it relates to politics. President Trump has, in less than one year, completely turned around our economy, crushed ISIS, put sanctuary cities on notice, slashed illegal immigration and returned respect for the U.S. throughout the world. The danger from all of this good news is that it can lead to Republicans becoming satisfied, complacent and this always has the potential of leading to political disaster.

That is why I am excited to be announcing today that in 2018 the Jackson County Republican Party, instead of being complacent, is doubling down in our efforts to support the Trump agenda. We are calling our campaign “TOGETHER, WE ARE THE VOICE FOR THE FORGOTTEN AMERICAN.” This campaign will be initiating a county-wide aggressive positioning, branding campaign which entails expanding our communication network with our members, showing the accomplishments of the Jackson County Republican Committee, under its current leadership team and its effort to become an all-encompassing, growing political party, pursuing an aggressive effort to expand our membership and most important show the citizens of Jackson County the differences between the Republican Party and the NEW Democratic Party. We are making this announcement by introducing our new logo.

Instead of using the traditional elephant in our logo, which evokes a more passive impression, we decided to use an image of an elephant which would better reflect our positioning strategy for 2018 and beyond. You will notice that the trunk and head are raised up and the leg is lifted the elephant is not stationary but charging forward. You may right click on the graphic below, download it and share the story on social media.

You will soon receive information so you can see firsthand how our strategy is going to unfold. If you wish to see the entire campaign laid out, we strongly recommend that you visit our Jackson County Hospitality Suite at the Missouri State GOP Lincoln Days event taking place Fri/Sat, Feb 2/3 in Kansas City. And attend our Jackson County Republican Party Lincoln Days at Adams Pointe Conference Center on Saturday, Mar 10 so you can see the theme expanded upon and applied.

Make reservations NOW! We look forward to seeing you there.

Every Year State and County Republican Party Committees hold their largest fundraising event of the year. This year the Jackson County Missouri Republican Committee is hosting THE REAGAN LINCOLN DAY FUNDRAISING RECEPTION & DINNER. Several of our statewide 2016 election winners will be joining us; the Keynote Speakers will be the Honorable Missouri Secretary of State Jay Ashcroft; Juan Pablo Andrade, who was Executive Adviser for the National Diversity Coalition for the Trump Campaign and is on the Hispanic Advisory Council for President Trump. Such key lawmakers to attend the Private Reception and the Dinner will be House Speaker Todd Richardson (R) from the 152th District and Majority Floor Leader Mike Cierpiot (R) from the 30th District. Missouri Attorney General Josh Hawley and Missouri State Treasurer Eric Schmitt are expected to attend if scheduling allows. There is a chance that Missouri Governor Eric Greitens may also attend, but confirmation has not been received at this time.

The Private Reception with our Statewide 2016 Election winners, key lawmakers, and esteemed guests of honor will begin at 5:30pm.. The Dinner following the reception will begin at 6:30pm. Tickets can be purchased directly at http://www.jacomo.gop/jackson_county_lincoln_days Links can also be found at https://www.facebook.com/events/1147875791964841/ . Tickets are $125/person for the VIP Reception and Dinner, which includes membership in our Republican Ambassadors Club. Dinner tickets, for dinner and program only, may be purchased separately at $40 each.

Our goal is to increase the number and visibility of Republicans in Jackson County by outreach and involvement in the community through municipal, county, state and national elections. County Chairman Mark Anthony Jones states that the event is “Part CELEBRATION of our 2016 success, part HONORING of our 2016 election volunteers and part PREPARATION for continuing the work we have begun. We have invited ALL of our 2016 statewide election winners to be with us for the VIP Reception and to say a few words at the Dinner. We hope you will join us too!”

The Jackson County Republican Committee is the second largest county in Missouri, but has the largest committee supporting the party, and as such plays a vital role in Missouri elections.

Although we faced many challenges leading into 2016, we captured EVERY opportunity we were given and were successful in electing every single statewide candidate to office in Missouri and in addition, in the most spectacular fashion, we have elected Donald J. Trump as our new President! The message of destroying political correctness, upholding our Constitution, securing our borders, draining the Washington Swamp and even the message of making Christmas Merry again, prevailed!

We are looking for qualified people interested in running for office here locally. We have several state representative and state senator offices without a Republican challenger. There are city council races and county races that all need candidates. We have beaten the Democrats to a pulp on a statewide level, but we need much work in Jackson County. If you know of someone interested who needs to talk about their interest in running, please have them get in contact with Mary Potter or Mark Anthony Jones or any of our county committee.

1) January 9 – Inauguration of Governor Eric Greitens in Jefferson City on the Capitol steps at 11:30 am. www.newmissouri.org

Thanks to each of you who volunteered, who ran for office, who fought the good fight in person or on social media in 2016! We look forward to working with each of you this year to continue to fight for freedom, grow our party, and elect Republicans in the next cycle! There is no “off year” mentality tolerated if we plan to win. We start now!

You can join us using

Created with NationBuilder – Theme by Tectonica